I do have to apologize for not updating you all on my travels, but I will reassure you that the past three days have been so much fun! We left Gili Air on a fast boat on the 12th of May and headed to Amed, which is directly west of the Gili Islands. Amed is along the coastal strip of fishing villages on the east side of Bali. The scenery in Amed is just beyond beautiful. Especially if you watch the sun setting behind Mount Agung. Breathtaking!

The place we stayed at in Amed was called Villa Katana. It was a gorgeous two story villa with a pool, parrot, and Monkey. The parrot was so nice, his name was Kobe. The Monkey on the other hand…well lets just say he was both aggregive and cheeky.

On the 13th of May we made friends with a gentleman who manages Villa Katana who’s name is Wayan. We ended up chatting for awhile about our families and homes, and then he invited us to his village! We all took scooters up to his village which is called Bang-Le. I asked Wayan if the name of his village meant anything, in which he tried to explain on the scooter that it was named after a medicinal plant. He was telling me the whole story but due to his limited English and me not hearing him because of the scooter ride, the meaning was all I took away from our talk. Once we got to the village Wayan said that there were around 1,000 people living in Bang-Le, about 300 families. All education in Bang-Le ends at 8th grade, and the average age to get married (for the girls in the village) is between 16-21. Wow! I’d be an old spinster if I lived in Bang-Le! 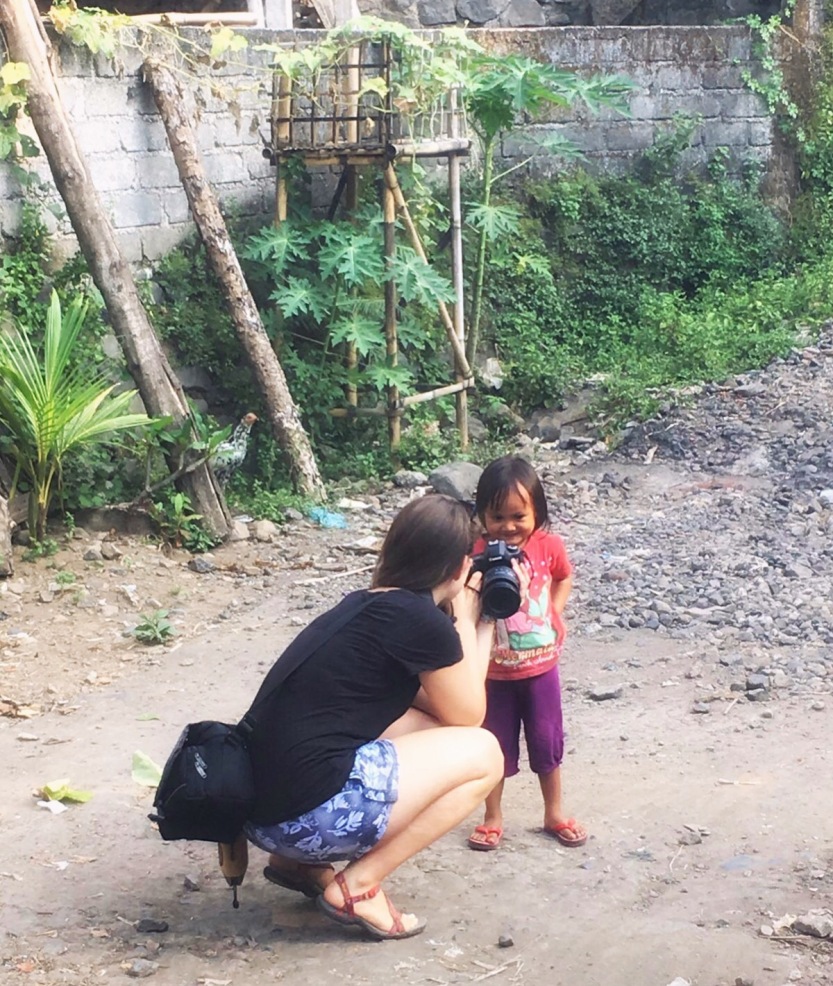 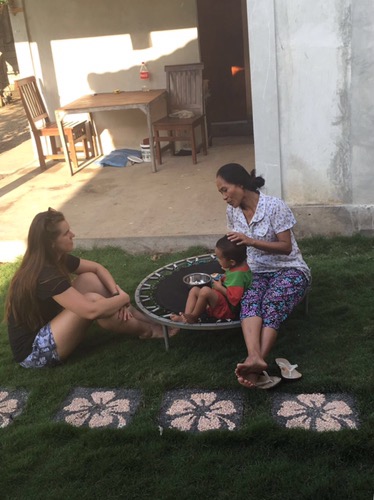 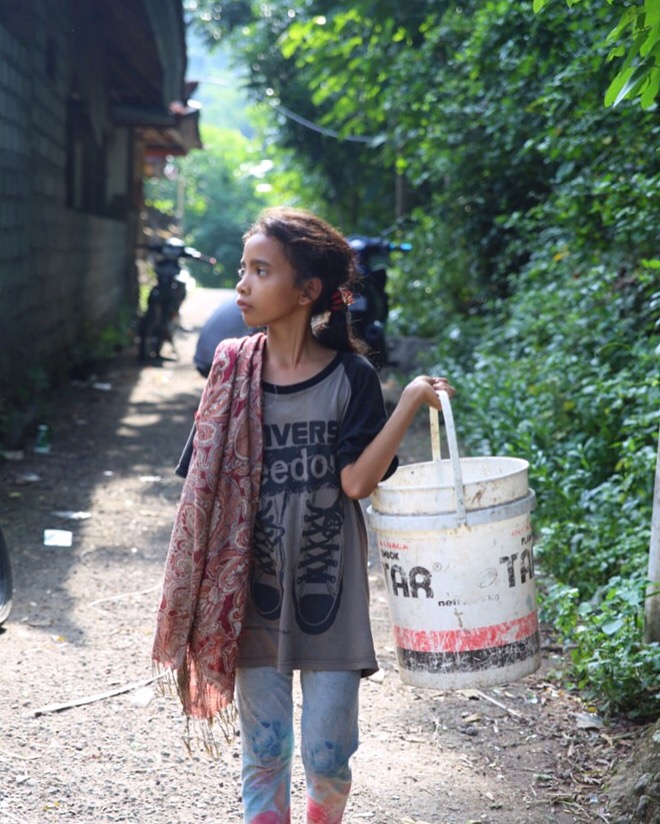 After our tour of Wayan’s village, we all got drinks at a restaurant called ‘Waeni’s Sunset View’ and watched the sunset. 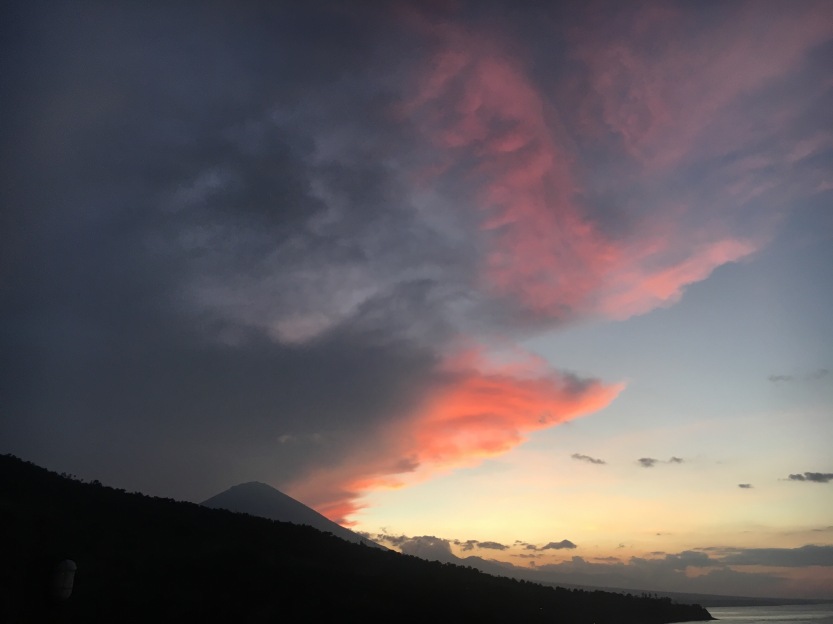 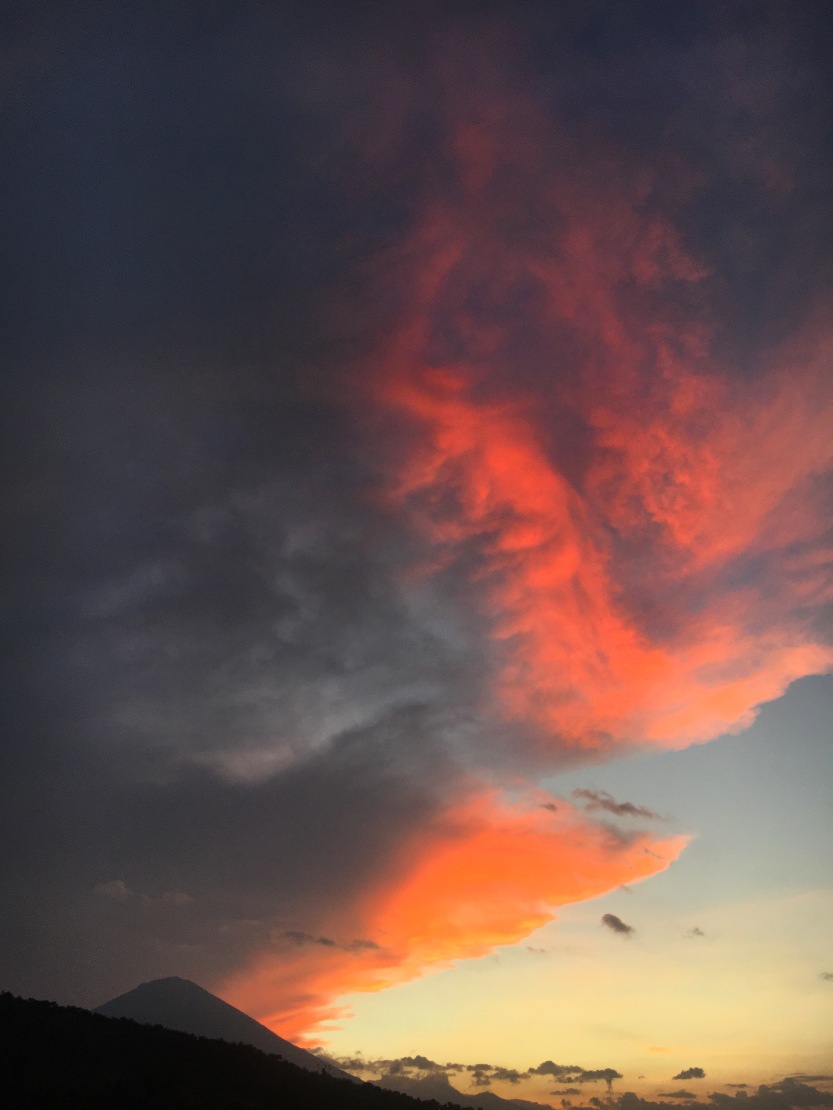 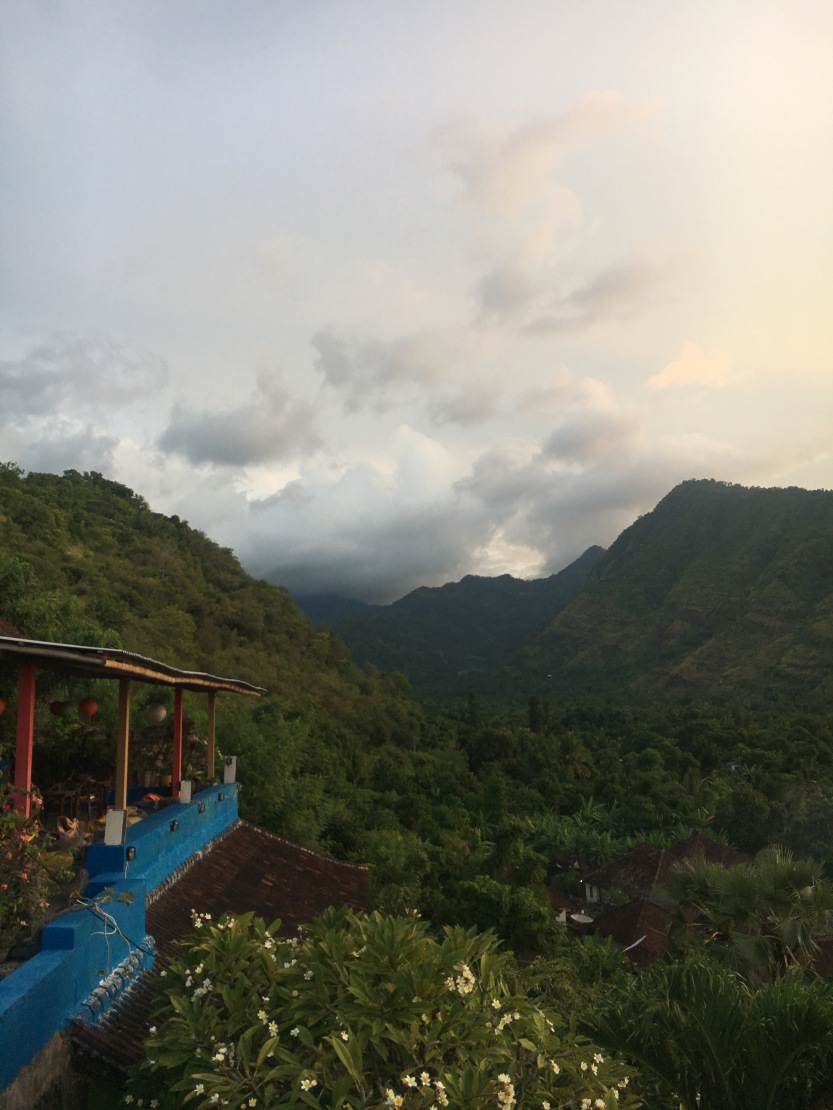 The next day we had a scuba-diving filled schedule, along with that was an extra dose of special because it was Jamie’s birthday! We woke up fairly early to eat breakfast and then Jamie, her brother Scott, and myself headed off to BL Dive. My partner was Charlotte who was an instructor at the dive shop. She was a French girl who was about my age, and was just my buddy for me to have so I didn’t scuba dive alone (Jamie was with an instructor since she is not certified, and Scott had his advanced certification so he was with someone who was on his diving level). We went on two dives, the first being a small shipwreck called the USS Liberty Wreck. Charlotte and I had trouble equalizing so we both took our time heading down to the wreck. The visibility wasn’t the greatest, but the ship was beautiful! Plus we got to swim through parts of the wreck. So rad. 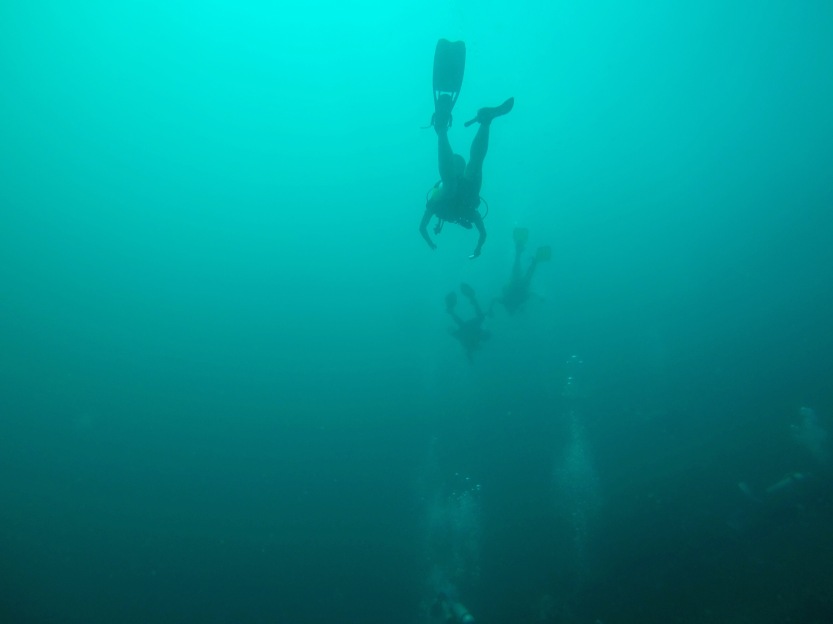 The second dive was about a three minute dive from the Liberty Wreck. The dive site was called The Dropoff. We basically scuba dived alongside a coral wall for 38 minutes. There were lots of fish, and I even saw a squid and a turtle. But aside from that the visibility wasn’t the best. Also, going out to our points of descent was a walk out. Which meant that we literally waddled with all our gear, fighting against the waves crashing in, and then swimming out to the ocean. I honestly will say that is not my first choice in getting to the dive spot, but still a cool experience.

After diving, all three of us went to a French/Indonesian restaurant called Galanga. It was delicious! We all got appetizers, entrees, and dessert. Then the waitress brought out a little carrot cake with a candle for Jamie’s birthday! It was so cute and so special to spend time with Jamie on her birthday. I feel very blessed to have a great travel buddy like Jamie. What a great sister and friend. 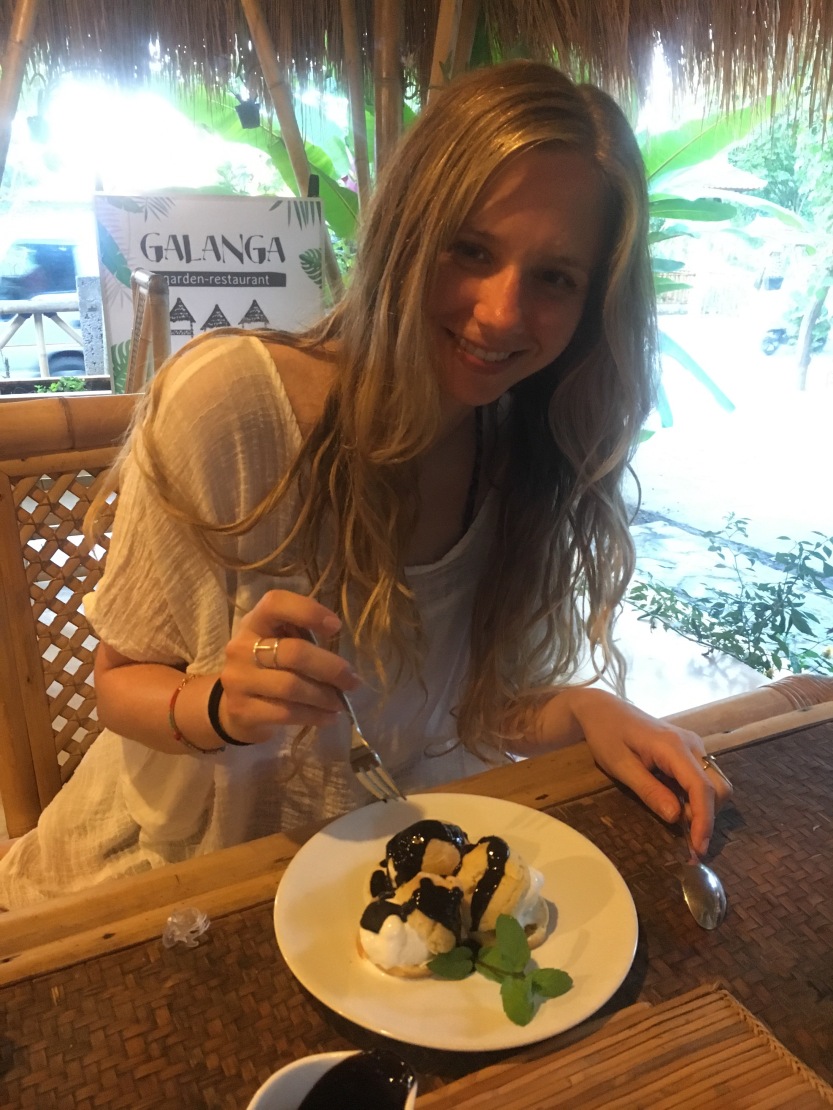 Today Jamie and I parted ways with Amed and also her brother Scott. I also want to give a quick shoutout to Scott who’s been so awesome in helping us out whenever we needed his assistance. Plus he being a pro traveler, we felt very honored that he took time out of his travels to spend time with us. Thanks Scott! If you ever need anything just let me know if I can help! You rock brother!

At around 10:30am Jamie and I took a car from Amed to Sanur, which is a 2 1/2 hour drive south to the harbor where our fast boat was departing from. At 1:30pm we took the fast boat from Sanur to the island called Nusa Lembongan. We got to our hostel, which wonderfully enough was also a diving center (not a coincidence…I planned that😜). The next two days are going to be all diving, all day! And Jamie is going to officially get certified!!! Wahoo!