Last night I set my alarm for 6:50am so I could get ready and head to breakfast at Big Fish. That is actually the name of the hostel/dive center Jamie and I are staying at for our time in Nusa Lembongan. Of course I dozed on and off all night, then slept through my alarm…

Fortunately I only slept 20 minutes past my alarm and quickly got ready and both Jamie and I rushed to breakfast at 7:30am. My dive was at 8am, but it was a 10 second walk from breakfast so I wasn’t worried. Ate the majority of my crepe in a hurry and met just in time with my dive team. Jamie had decided to spend all her time getting her certified scuba license on the island of Nusa Lembongan. I greatly encouraged this idea and was so happy she decided to take the course! While she was in class all day my goal was to open water dive during the mornings and afternoons. So that’s what I did! 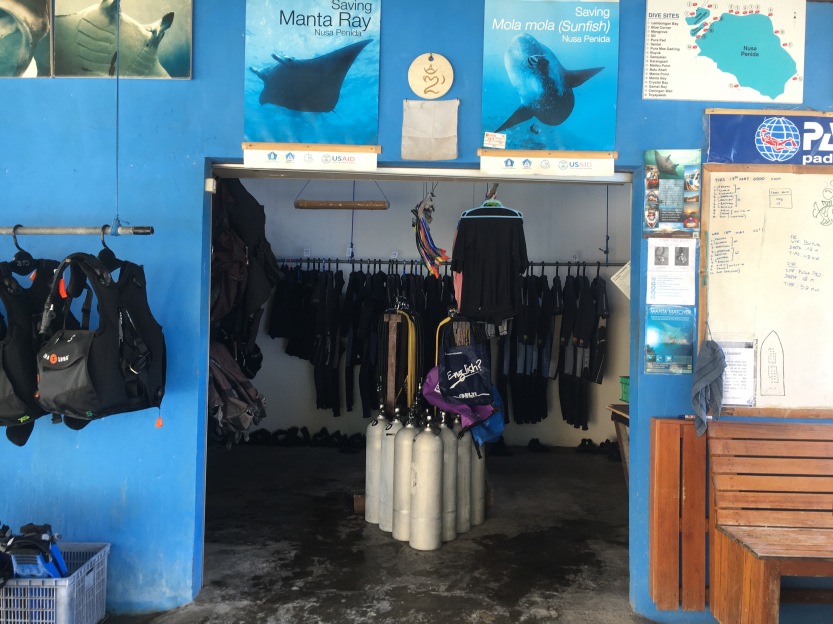 Our team was split into two groups. One guide took a couple from Finland, and our guide, Nacho (yes that’s his name) from Argentina, took me, a German fellow named Carsten and a Canadian Doctor named Brent. Carten’s partner Constanze was on the boat as well, but she went out to snorkel.

Our first drop off point was at Buyak, north of Nusa Penida. We dived for about 48 minutes. Visibility was decent. We were drift diving which means the boat drops us off at one end, and then we flow with the current until our tanks are empty. Once we decent, the boat picks us up at our safety stop. The current was so strong at Buyak! And at one point we did a compete 180 degree turn and drifted right back to our starting point.

We took a short break on the boat and had coffee, tea and a snack (veggies, tofu and rice wrapped in paper). And then headed off to our second dive site. The second dive point was called Pura Ped. Pura Ped was just a little bit west of Buyak. The current on that dive was much smoother, a very relaxing dive. Practically just coasted along for about an hour. At both dive sites the coral was so colorful and alive. I saw mantis shrimp, puffer fish, lion fish, and even a few spotted moray eels! Pretty neat.

We got back at around 1:30pm. Jamie was still in the middle of learning scuba theory when I found her. She wouldn’t be finished until around 5pm. So I went exploring and ended up at a cafe called Bali Eco Deli. I had a smoothie and a juice and journaled for a bit before I saw a few people I recognized.

Carsten and Constanze, the German couple that were on the same scuba boat as me, walked into the cafe. They came and sat with me and we talked for a few hours on traveling, politics and different cultures. Then Brent the doctor from our scuba excursion walked into the cafe as well and all four of us chatted for the rest of the afternoon!

By 5pm I made my way back to Big Fish where Jamie was finishing up her first day of scuba school. When she was finished we both made our way to a restaurant called Garden Green Warung and had a delicious dinner!

We are both pretty exhausted, and we are also diving all day tomorrow. I am scuba diving with another dive center that I found just by walking around Nusa. I don’t know anything about the center I’m diving with tomorrow, so we will see how it all goes. It’s all a part of the adventure, right? 😉
Until then… Goodnight!