Getting up Monday morning was rough. Both Jamie and I only got 4 hours of sleep. We had to get up at 6am to get ready to go on an all day Dynamic Tokyo tour. We walked over to Tokyo Station (10 minute walk from our hotel) to meet our bus tour. It was pretty foggy and was also drizzling, but the air was warm and clean. It felt good to be outside walking around the city.

At the bus station we met up with my friend Artem (Arti). He has been one of my good friends ever since my first visit to Russia in 2008. He has been doing research in Singapore, and heard I was coming to Japan and he decided to meet up with us in Tokyo!

After our quick and happy reunion we all boarded the bus for our sightseeing tour. There was about 35 or so of us (all English speakers), plus our tour guide. Our guide was named Mori San, which he explained means Forrest. And San comes after the family name (like Mr. or Mrs.). Also, random fun fact…The population in Tokyo is 12 million, which is only 10% of the whole county’s population. That’s a lot of people!

Our first stop was Tokyo tour. We were able to go up to the observation deck, which was 150m tall. The dreary look of the city was so beautiful in the morning. The light fog and the tall buildings, very picturesque. There was a look down point in the tower too where you could step on glass, look down, and see the base of the tower. 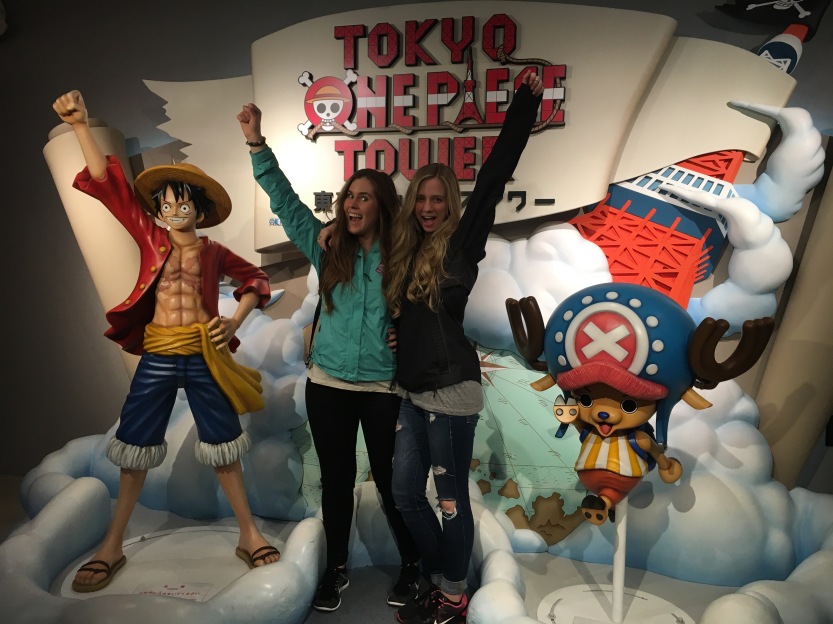 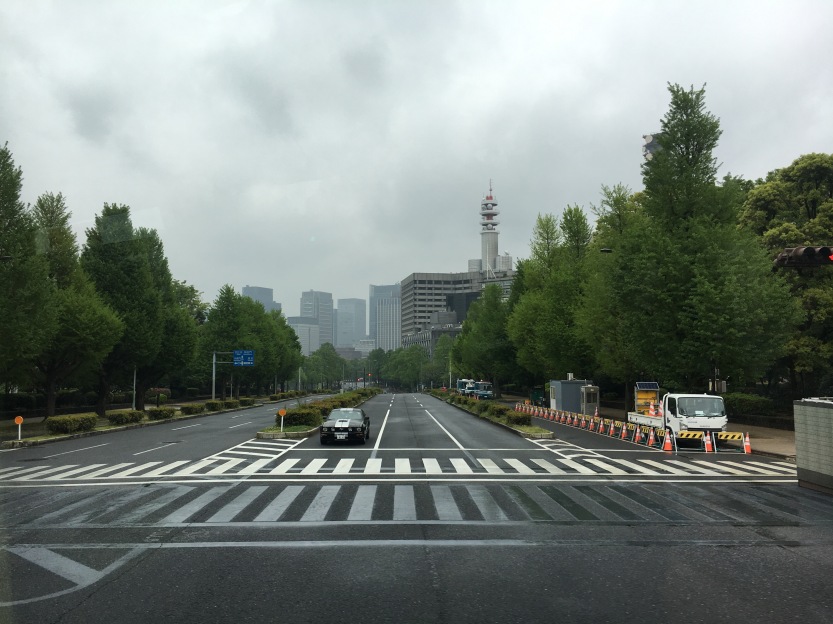 Our next stop was at a market near Ginza center where we participated in a traditional tea ceremony. The whole process was beautiful. Like an art form. Th ceremony took 30 minutes. Our group watched as a woman prepared the matcha tea from wooden whisks and beautiful glass ware. We were given a sweet to eat before the tea, then each guest was taught how to properly drink the tea. Left hand on the bottom of the cup, right hand turns the bowl twice in a clockwise position (making sure that if there were any images on the cup they would be facing away from you). 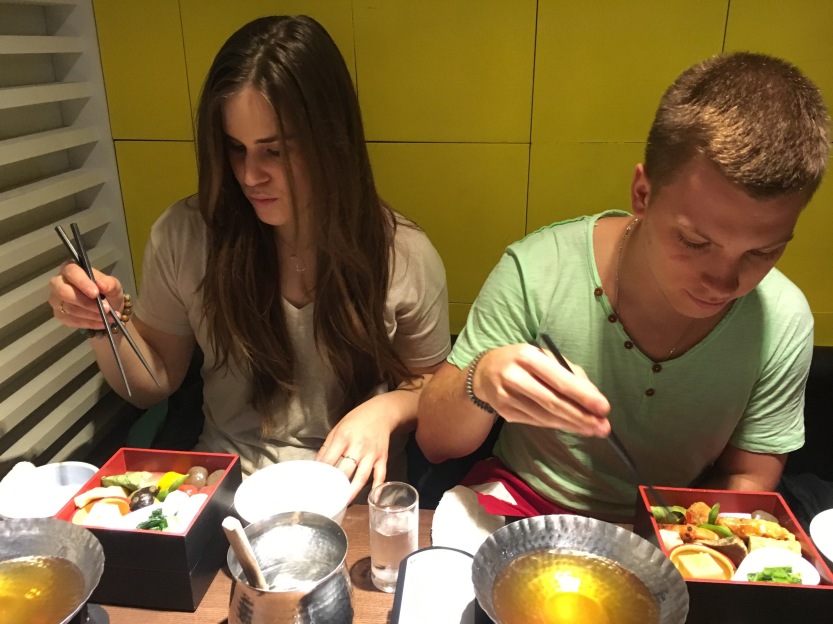 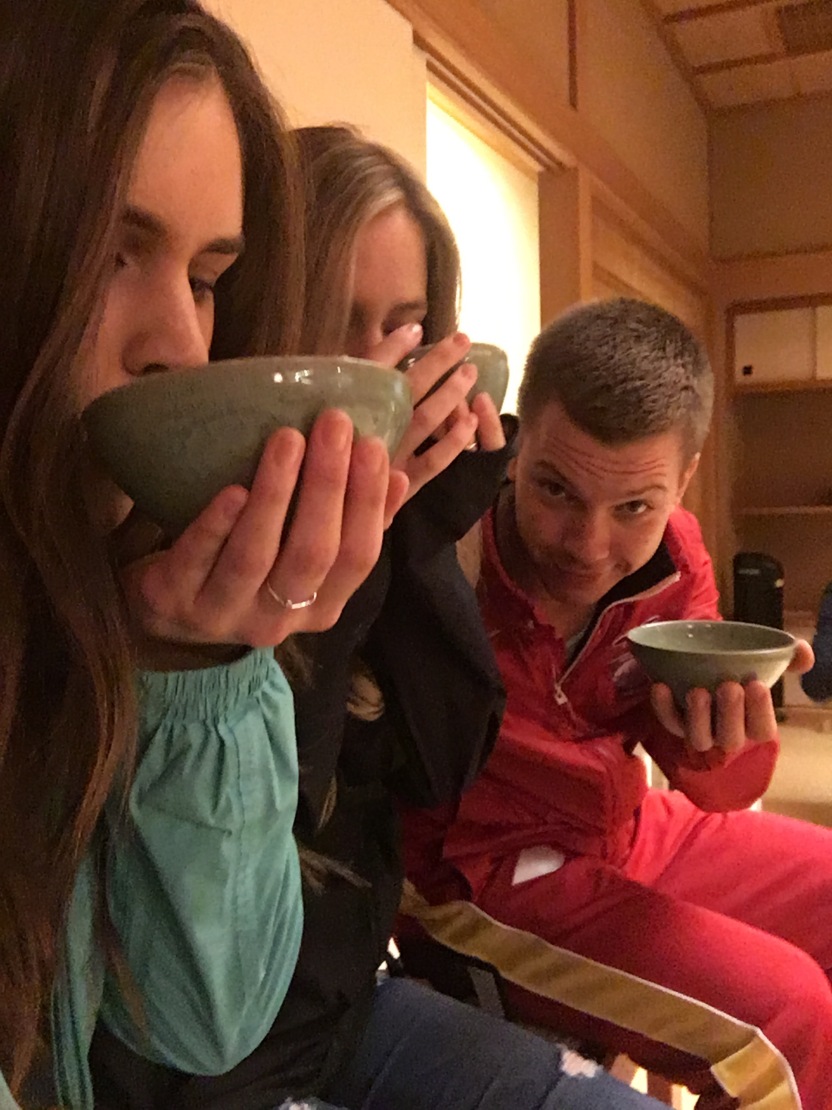 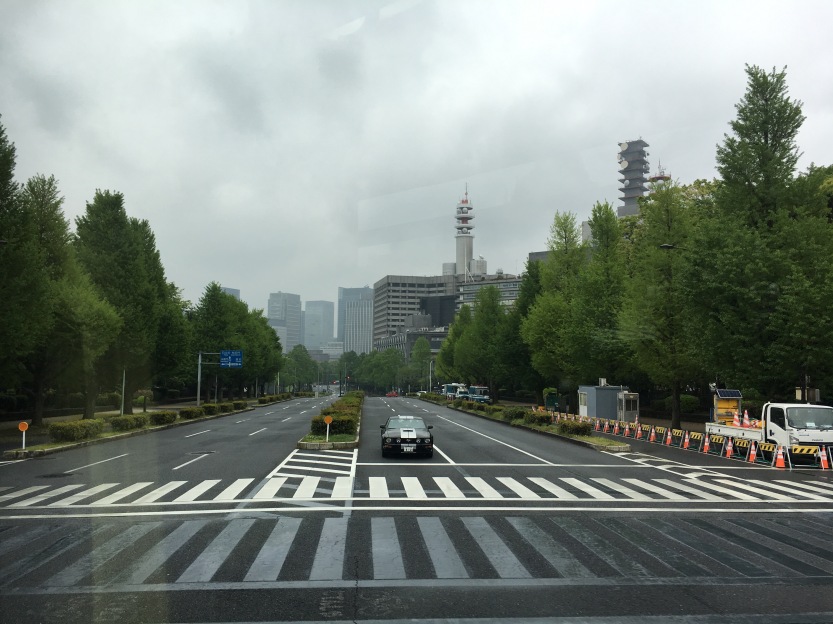 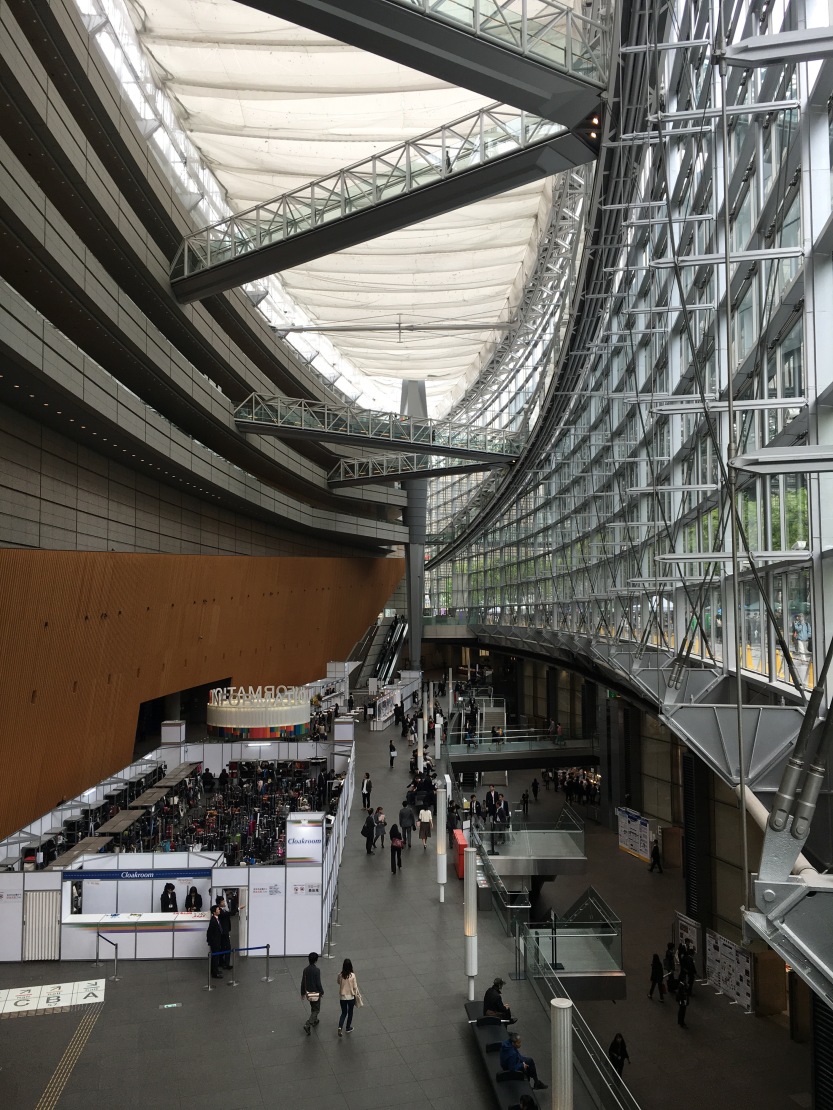 Once the ceremony was over Atrem, Jamie and I had a Japanese style lunch. We had an assortment of vegetables (with options of fish and meat) that we dipped in a boiling broth that was in the middle of the table. I also had Sake that was well known at the brewery where we were eating. 😏

We ate, then met our group and went to the Imperial Palace Plaza and to the Nijubashi Bridge. I really admire Tokyo and this city specifically because the streets and parks are so clean! Especially the palace grounds, not one gum wrapper or piece of paper anywhere on the ground. It was like a painting, everything was in it’s natural place. 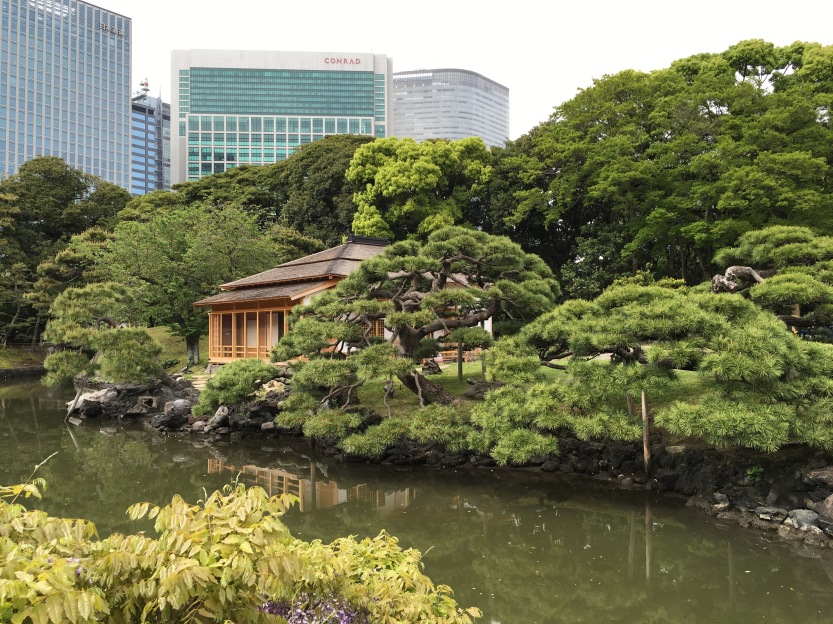 The Nijubashi park was very beautiful as well, which is located right next to the palace (3 minute drive in our tour bus). The park and national Graden was formerly a private garden of the Royal family. Walking around the park, I just couldn’t help myself…I was taking pictures with my canon camera of everything.

We walked to the river walk, and while I was pulling out my camera to take a picture of the scenic view, the lid to my lens camera fell off! And before Arti, Jamie and I could really react, the lid rolled right into the river! Arti tried to crawl down to see if he could reach it, but the ledge was way too steep. I was so bummed! But also I kept thinking it could have been wayyyy worse. My phone or the body of the camera could have fallen into the river (however, if that worse case scenario had happened I would have dove in right after it).

The Nijubashi park (aside from losing the lid to my camera) was my favorite! Very quiet with lots of flourishing flowers and trees I’ve never seen before. I could get very used to that environment. 🙂

The next stop was a Sumida River cruise which led us to our final stop, the Asakusa Kannon & Shopping center at Nakamise. Nakamise is a street leading up to the oldest Buddhist temple in Tokyo. It was jammed back with vendors selling food and trinkets; clothes and jewelry. Artem, Jamie and I got a sweet treat from one of the booths. I’m honestly not sure what exactly I had eaten, but it was four small gooey balls of dough that were dipped in some powder that tasted to me like peanut butter. Typically you would eat that treat with sweet matcha tea. 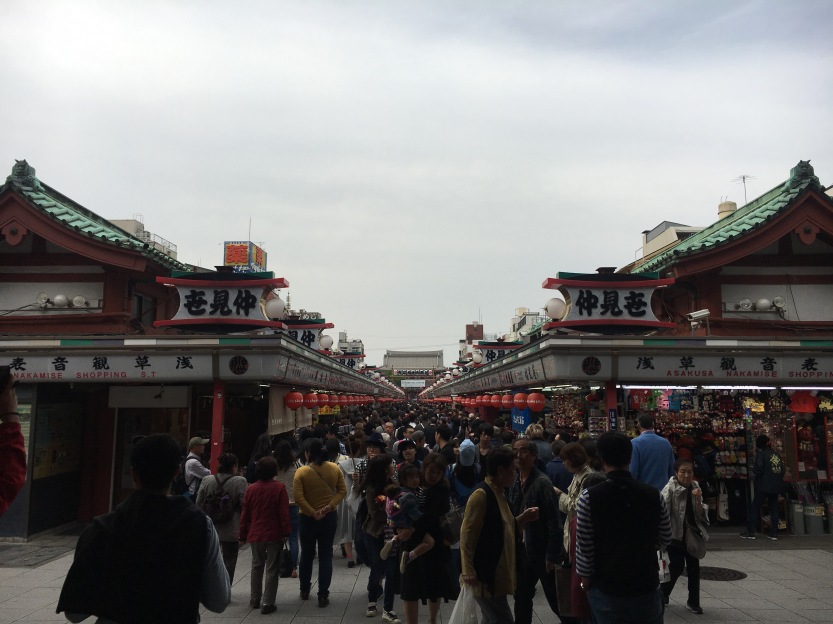 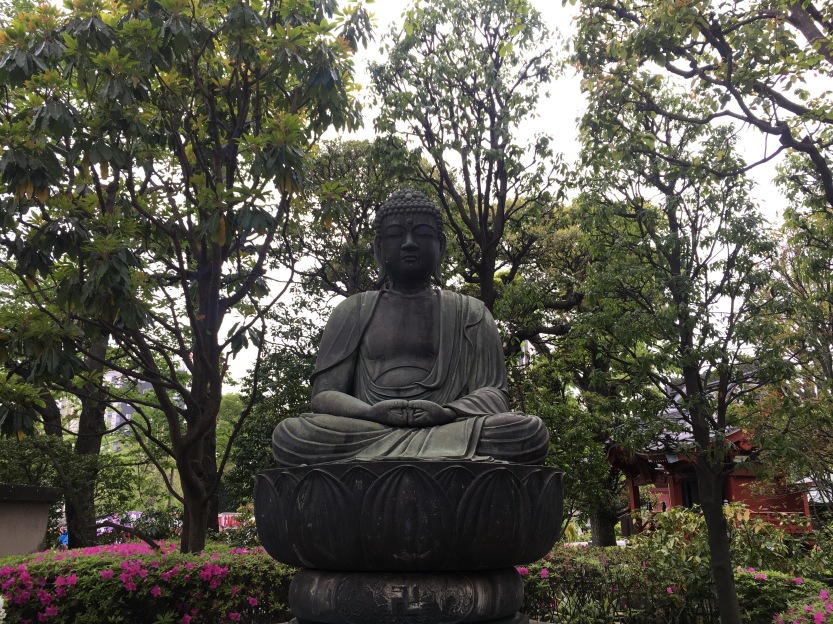 The Buddhist temple and the markets surrounding it were pretty amazing as well. If you enjoy people watching that was the place to be! That whole area was very much alive, I could have stayed just in that area all day!

We did however take our tour bus back to Hamamatsucho (the bus terminal where we met our tour). Arti wanted to find dinner, and Jamie and I were not opposed to the idea at all! So we decided to walk around the Ginza shopping center to find something to eat. At that point both Jamie and myself..well our energy levels were seriously declining fast. And because we still weren’t acclimated to the time change, we just ended up finding a small restaurant near a Starbucks in Ginza and had a quick meal before we headed back to our hotel. 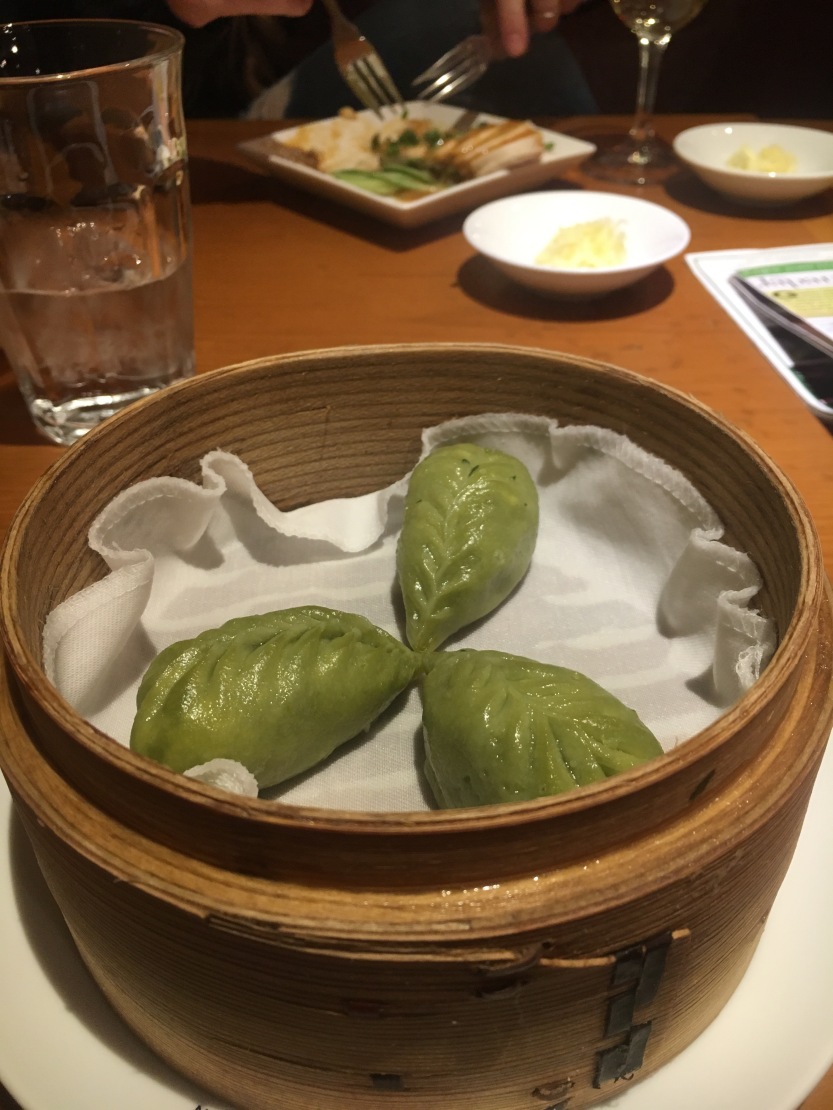 We split ways from Arti (he going back to his hostel), and by the time we got to our room we were completely exhausted…And it was only 8:30pm!

It would have been pretty hilarious if someone had come in and saw me blogging and Jamie journaling with our eyes half closed and drool coming out of our mouths. Jamie even had to wake me up because I feel asleep while typing. We ended up going to bed around 9:30-10pm. We tried to plan on going to bed early because we knew we had to get up even earlier the next day…

Where did we go?

I’ll give you a clue… One word… Fuji.

One thought on “Tokyo Drifters”